A bit of a History or How It Has Begun

Brand "Smirnoff" originated from Russia, from 1818. Since the beginning it was a vodka with pure and soft taste which was accepted by the russian csar Alexander III. For many years it was the only vodka served at the Imperial Russian Court. Later Sweden and Spain also had Smirnoff like a royal vodka.

The success was changed after the October revolution of 1917. After a change of a government all the manufactures in Russia were closed. However, fortunately, all the tradition recipes and original name were sold to Rudolf Kunett who was a supplier of grain for vodka producing.  In 1933 Ste. Pierre Smirnoff Fils has been registered in USA and Kunett had set up a small vodka plant in Bethel and was trying to build an American market. He was enjoying a notable lack of success. Americans did not drink vodka. Most had never even heard of it.
By chance John Gilbert Martin the president of Heublein Inc. decided to support new product. He offered Kunett a deal. He would buy Kunett's equipment for $14,000, give him a job and a royalty of 5 percent on each bottle of Smirnoff sold for 10 years. Kunett took the offer and Martin set out to see if he could sell Smirnoff, the vodka of the czars, in an age when there were no czars.
Smirnoff vodka is basically a mixture of pure grain alcohol and water filtered through charcoal. It requires no aging and production and sales started in Hartford in 1939 even before Heublein had any caps for the vodka bottles. Instead, caps labeled "whiskey" were used.
One of the first out-of-state sales was to a distributor in Columbia, S.C., who bought 10 cases. A short time later, the distributor ordered 50 more cases, then 500 cases. And Martin went to Columbia to check on the marketing phenomena. He later recalled, with more than a bit of delight, what he had found.
"We had a salesman down there and he had put up a great streamer: 'Smirnoff White Whiskey -- No Smell, No Taste,' " The Hartford Times quoted Martin as saying in a 1964 article. "It was strictly illegal, of course, but it was going great. People were mixing it with milk and orange juice and whatnot."
Martin created a drink. It was made of Smirnoff vodka and ginger beer and served in a copper mug. They called it the "Moscow Mule." Later Smirnoff vodka formed the basis of various types of famous cocktails.

During the Cold War with Russia the popularity of russian drink started to fluctuate and a campaign had been began to get people to drink the vodka with not only ginger beer but practically anything else, including iced tea and beef bouillon. It was all promoted by exotic high-gloss magazine ads showing Smirnoff with celebrities or in strange and wondrous places. The brand has been acquired in 1982 by Reynolds Tobacco Company for $1.4 billion. After that, Smirnoff has been re-sold to Grand Metropolitan in 1987 and today, it is owned by Diageo (merger between Grand Metropolitan and Guiness) since 1997. In 2010, the company did a 13 billion £ turnover. Smirnoff, thanks in part to the campaign, eventually became the world's best-selling vodka, and it still is.
It is known for its very wide range of vodka products, from the basic Smirnoff n°21, drunk pure or with some soft drinks or juices, to some flavored vodkas with lemon, green apple… very appreciated by young people. In 2010, Diageo sold 24.8 millions 9-litre cases. 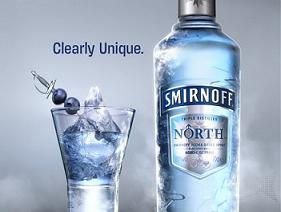 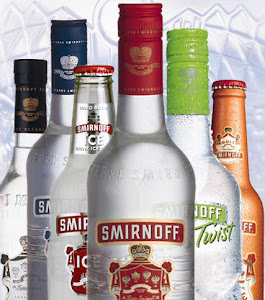